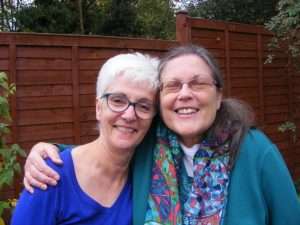 Chris’s husband, Nick, has lived with Huntington’s disease for more than 25 years. He moved into a local nursing home in 2020, just as the country went into lockdown. She talks about the impact this has had.

It’s always been just the two of us. We decided not to have children when we got married because Huntington’s is a genetic condition. Nick saw his mother and brother pass away from the same cruel disease.

We moved from our semi-detached house to a new build home in 2018 as it was easier for Nick to manage there. We had great carers coming in too to help us. I’d already taken my teaching pension early in 2012, just doing a few hours here and there until it became extremely difficult to leave Nick alone. Nick and I thoroughly enjoyed our time together and we carried on going abroad and having weekends away until February 2020.

Nick had been in and out of hospital over the years with lung-related problems associated with Huntington’s. At the beginning of March 2020, myself and a carer tried to get Nick out of bed but found he was paralysed. I rang palliative care, they asked me to take his temperature and call an ambulance. He was in hospital for two weeks before they suspected he had Covid, which was later confirmed.

After a few months, he was transferred to a care home – I wasn’t allowed to see him there and even had to ask a carer to take him some clothes. I checked out lots of care homes, with my best buddy, Jenny (pictured left), whose husband also had Huntington’s.

The next time I saw him was in the present nursing home. At the time, I still thought he’d be coming home and painted his room. But covid-19 had done a lot of damage and he needed to stay permanently at the nursing home. I could only see him through the window. It was totally upsetting for both of us. For a while Jenny’s husband, Eric, also lived at the home and they would watch TV together as mates. But sadly, Eric passed away.

I’m lucky to have Jenny who totally understands what I am going through now, and I also speak on the phone to my sister every day. My church has been a great source of support, the vicar used to ring me up regularly. I’m one of the helpers there as I like to have a balance of different things to do. Now and again, I come to a Carers in Bedfordshire group, but I have to be in the right frame of mind for that.

When your relative has to move into a nursing home, we experience it as a bereavement. I really miss Nick, even though I go to visit him every day. Thankfully the managers at the home are fantastic. They value my input as Nick’s wife and I know that, like me, they love him too.

Donate to help other carers like Chris
all carer stories