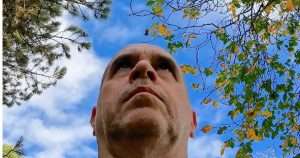 “Are you hippy?” asked the heavily accented voice on the phone.

“Um, is er Mark there?” My girlfriend answered, a little thrown by this unexpected voice on the flat share phone.

There followed a long pause. Then…

My girlfriend hung up. It was probably the wisest strategy in the circumstances.

The voice on the other end of the phone had belonged to Patrique – a French Lebanese Commis Chef who sang happy little ditties as he cooked, and seemed to subsist on meat with a side order of meat in a meat dressing served with a splash of meat and offal jus. This he would wash this down with coffee so sweet and so strong that you could have put William Shatner into space on it. Without the rocket.

“Are you hippy?” was Patrique’s one and only fragment of English, and he generally used it sparingly. So why on earth he had chosen to pick up the phone that day still defeats me. Unless it was to torture some hapless call centre sales droid. But it always struck me as funny, and actually quite charming that this was the one slither of English that he’d chosen to commit to heart.

People are obsessed with the idea of happiness. Entire industries exist to create, expand, or surpass your own experience of it. You cannot do an online grocery shop these days without three or four pop-up questionnaires interrupting, desperate to know how happy you are with the experience so far, which ironically makes me VERY, VERY UNHAPPY if it causes me to forget something. But then I am the forgetful sort. I think.

It is looked upon as being the social ideal to present as happy. We are expected to display that stiff upper lip or Dunkirk spirit even if our leg is hanging on by a thread, we’ve discovered our hire car is French, or we have been designated the long-haul aircraft seat beside Katie Hopkins. In my experience some carers are very adept at this, often to their own detriment, while others are far too exhausted to even try.

Meanwhile, as evidenced by the not very multiple-choice performance rating questionnaires that we are encouraged to fill out, agencies subtly pressure carers to present as happy. And they do this often, it seems, so that they can then go on to ignore some of our most pressing and paralysing needs.

But I may be cynical about that.

The thing is, if a carer and their family are perceived as or represented as appearing ‘happy’, then they’re assumed to be coping. But this, as we well know, is not always the case.

It’s about perceptions innit! They’re a funny thing perceptions. Non-musicians seem to have this romantic perception that the great songwriters would perch themselves on silk cushions in a Shepherds Bush ashram and compose a song thusly: “Bravo Saul, that intricate exploration of the F as it transitions between Em7, A7 through Dm eloquently evokes the timeless struggle between the cosmic yin and the yang, inspiring fresh appreciation of the interplay between the Scouse and the non-Scouse in the sectarian metaverse of the soul.”

When in reality it goes something like this: “God, Bongo I love that! Hit it again! FASTER! WITH YOUR HEAD! Oh… Anyone got a spare battery? Buuuuurrrp!”

Personally, I love it when an over thinky book club member insists to an author that their latest work is a deeply personal investigation of the factures inherent in the interplay between modern forms of blahdiddlybooblah, and the writer replies: “No, it’s about dogs. I like dogs. Dog go woof.”

That’s the thing about perceptions. If you don’t slap them down, and hard, then people just go with them, because they’re cosy, comforting, self-aggrandising, and – most of all – don’t require the expenditure of any significant thought, effort or resources.

It makes me genuinely seethe when I see an opportunist politician mussing up the hair of a single charming disabled person for something that they’ve done, praising their resilience and inspirational qualities. What I, as a carer, want to know is why these ballot bimbos never get challenged on how Mum feels about disability services being cut? Is Dad ecstatic at the thought of his vulnerable child being cared for in the future by underpaid, under trained, unsupervised agency workers? How are the other kids coping with the vicious cruelty of their teenage peers or the existential guilt that they can’t access a counsellor to talk about?

I know that we, as a family, are pretty well-off in the happiness stakes. We’re a tight unit, focussed. Together. But that has been hard won, occasionally eviscerating, and has required a lot of soul searching and compromise.

But being any kind of carer in Britain in the 21st century is NOT anybody’s idea of happiness.

Our care system is like an IKEA wardrobe, that arrived with all the wrong parts, and an instruction manual in Mandarin, and was put together by monkeys. In the dark. It tries hard, but it tries from a brazil nut balanced on top of an egg shell foundation. And so, every time we, as carers, are pressured to smile on the outside, even as we die a little on the inside, we do a disservice to ourselves and others in our position. We give the false perception that we’re okay with the constant degradation of our services, living standards and life expectations. We give the perception that we think it is acceptable for the rest of society to simply view us as the unlucky ones, and feel good about throwing a little change in a begging bucket once in a while.

And we give carte blanch to a deeply flawed and politicised health and care system to go totally goldfish on us as soon as the new re-election cycle begins.

I met someone who works in a Government ministry recently. He described a recent Cabinet Minister whose modus operandi appeared to be to start a variety of ‘innovative’ or simply logistically batshit initiatives that grabbed headlines as they were announced, but which could only realistically come to fruition ten years down the line. The ambitious minister would typically have moved on from that department within a year, and those initiatives would then quietly be cancelled by the next incumbent. Imagine if you ran your own household like that! There will definitely be sausages for tea! What sausages? There are no sausages! I never said there would be sausages? What’s a sausage???

So, next time you receive a tick box survey on whether you are ‘hippy’, cross out the boxes, get a pen, and let them know, politely but firmly and in unsparing detail. My kids have always been a kiss upon my consciousness (when not smelling of strawberries and Marmite). But, let’s be honest, this situation in which we unexpectedly find ourselves, even with all that we’ve learned, often sucks to high heaven. Tell it how it is. To anyone who will listen.

Now, would you like a little bit of extra meat with that..?