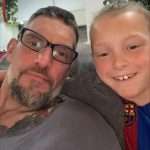 Mark’s 10-year old son, Ralph, has ADHD and OCD. He moved in with Mark in 2019 and Mark has been a full-time carer ever since.

"I love being his dad, it's the best job I've ever had. But there's a paradox because I wouldn't choose to do it"

Ralph’s ADHD is his superpower, he can run faster and longer than other kids his age. But he’s also impulsive, forgetful and needs to keep moving to burn of all his excess energy. His behaviour can be challenging too – sometimes hostile and inappropriate.

During term-time, Mark is at school “every other day” to advocate for Ralph, because he can’t articulate his own needs to his teachers. During the holidays, Mark says: “It’s relentless”. Ralph doesn’t like the change in routine and misses his TA. He doesn’t like to take his medication in the holidays and has even more energy to burn.

Becoming a carer was a big life change. Mark used to own a building company but had to give that up. It had given him a good income and now that’s gone. Money worries are common and he says stepping back from his provider role is difficult.

“Does anyone recognise what I do now?”, he asks.

Mark used to go to the gym and socialise more. Now he says he “hasn’t come out of lockdown” because he doesn’t have any spare time.

At first, Mark says he felt hopeless and struggled to ask for help. “But I had to. My priority is Ralph’s mental health but mine is slipping too. People are kind, when they know you’re a single parent to a child with additional needs, they want to help.”

Mark spoke to a CIB support worker regularly for about 18 months: “It really helped to have someone to listen because at first everything was really hard – even the simple things like making packed lunches. I don’t need that so much anymore but we’re looking forward to some trips run by CIB.”

Find out how we help male carers
all carer stories