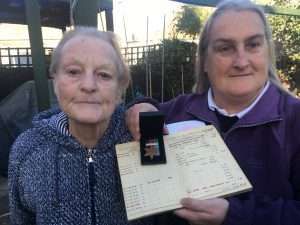 Dementia carer Susan made an important find at the reminiscence session, following one of our Ancestry Talks where our support worker Anni spoke about her father’s wartime experiences.

Susan explained she still has her grandfather’s RAF logbook from the Second World War (pictured). On examining the book Susan realised her late grandfather Warrant Officer Eric Percy Coyle, would have been entitled to a Bomber Command clasp for his medal, as he was in the 101 Squadron, which took part in many bombing runs across Europe.

The Bomber Command Clasp was introduced in 2012 and is granted to the aircrew who served for at least sixty days, or completed a tour of operations, between 3 September 1939 to 8 May 1945.

Susan applied for the clasp from the Directorate of Honours and Awards, on behalf of the UK Government. The clasp was granted, and the family now have the treasured award

“It’s just so lovely for my mum, who I care for who has dementia, and my aunts that they now have this clasp. It’s helped us to connect and find out more about the family history."

Reminiscence means sharing life experiences, memories and stories from the past. Typically, a person with dementia is more able to recall things from many years ago than recent memories, so reminiscence is very important to them. It can give people with dementia a sense of competence and confidence through using a skill they still have.

When a person with dementia shares something about their past and another person shows interest or enjoyment, it is a wonderful opportunity for them to feel they are the one who is giving something, rather than always being the one who is receiving help.

Donate to help other carers like Susan
all carer stories