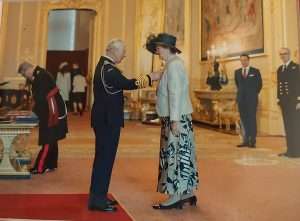 Carers in Bedfordshire’s (CiB) former chair Dr Anne Grant has received her MBE medal from The Prince of Wales for services to the charity.

The investiture was made in recognition of Anne’s unwavering commitment to the needs of unpaid family carers across Bedfordshire. She attended the ceremony at Windsor Castle, after it had been postponed last year due to Covid.

Anne joined Carers in Bedfordshire soon after it was founded by Yvonne Clark in 2004, volunteering as a telephone befriender and a trustee. Anne went on to be chair of the charity from 2010 to 2017, and she oversaw a period of great change as the organisation evolved into becoming the well-established and respected charity it is today.

On receiving her medal Anne said: “I finally made it. Almost two years ago I was overwhelmed to be awarded an MBE, after being nominated by Carers in Bedfordshire and I’ve finally received it. The interior of Windsor Castle was stunning and as we progressed from one amazing room to the next, a string quartet played to create a lovely atmosphere.

“Finally the moment came when my name was called – ‘Dr Anne Grant for Services to Charity in Bedfordshire.’ I walked forward to stand in front of Prince Charles and curtsey.

“He fastened my medal to my jacket, and asked me what my link with caring was. I explained that my husband had been severely disabled by a stroke and I had got involved with a local charity to support unpaid family carers, like myself, for whom there was little or no support. He asked if, after I stepped down, the charity was still running. I told him absolutely, the need is greater than ever.

“It was an amazing experience never to be forgotten. Thank you, Carers in Bedfordshire, for nominating me, though I feel it should be shared by the Board and my two children without whom I could not have survived and of course my husband Forbes.”

Let us know if you liked the post. That’s the only way we can improve.

Carers in Bedfordshire’s (CiB) former chair Dr Anne Grant has received her MBE medal from The Prince of Wales for services to the charity. The investiture was made in recognition of Anne’s 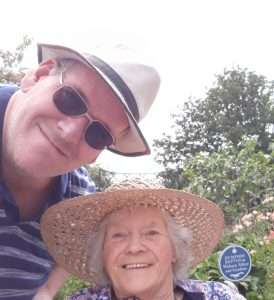 A Bedfordshire carer has published his collection of poems, inspired by his experience of caring for his mother with dementia, in a book which is available on Amazon.